Changing it up a bit – What the height of civilization could look like,

+ a multi-launch approach to space travel

The main down side I see with using this multiple launch approach might be the cost. But if we are able to crowd source funding by having many companies build just 1 or 2 not ships,then the cost can be spread out to be more manageable. This can also be a long term approach, rolled out over many years, thus keeping any total sum having to be paid out at any one time to a minimum.

This is the  Kardashev scale … 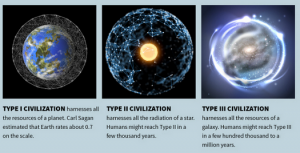 the late and great CARL SAGAN –  imagined a type of Civilization that had total information mastery,

What do YOU think of what has been presented? Leave your comments and questions below. I really want to know what you think about any of this, I don’t get offended easily so please go ahead and call me on any bullshit. Correct my ignorance and point out my problems. You will be doing everyone a favor – but none more than me.

So, thank you and enjoy